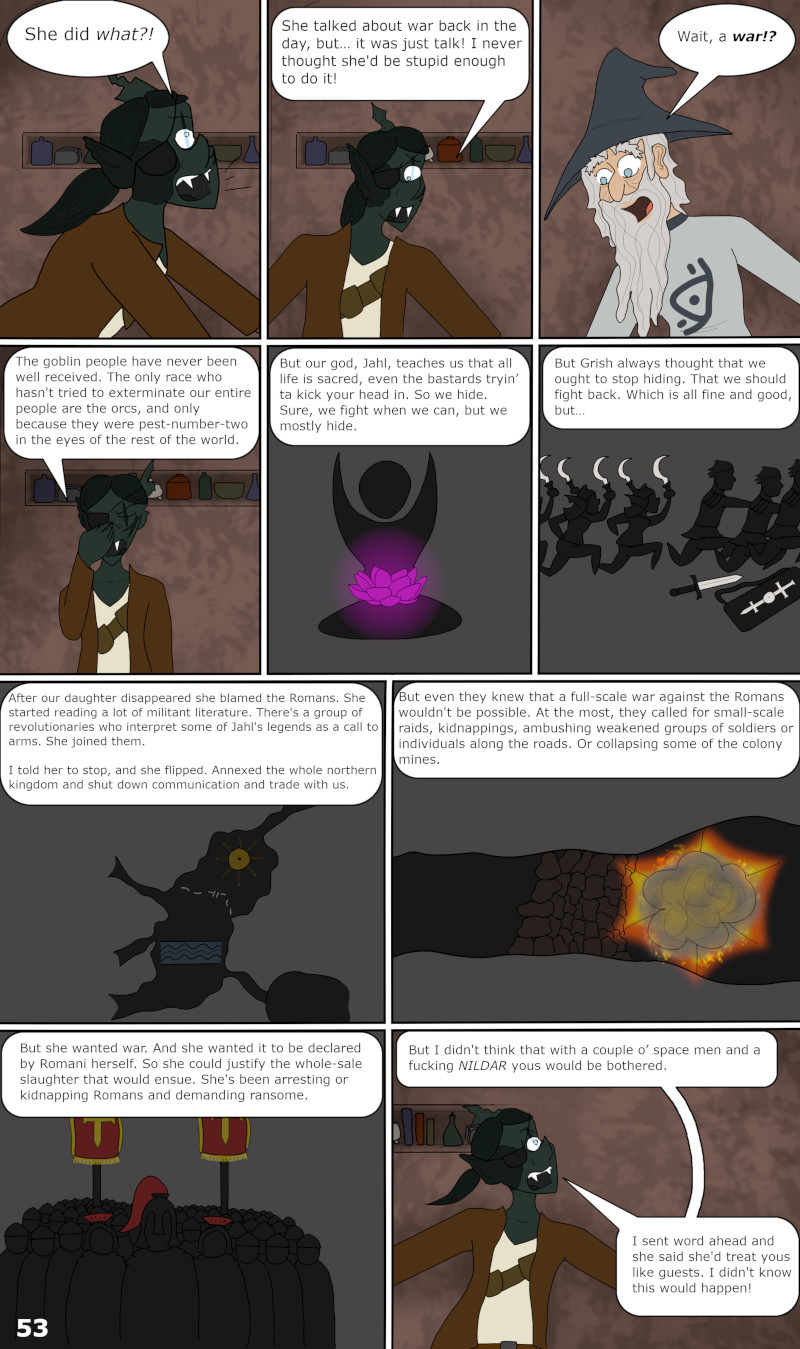 (Scene change. Back in Jegga. Alexey et al talking to Jo’mak.)
Jo’mak: She did what?!

Panel 2
Jo’mak: She talked about war back in the day, but… it was just talk! I never thought she’d be stupid enough to do it!

Panel 4
Jo’mak: (pinching bridge of nose in frustration) The goblin people have never been well received. The only race who hasn’t tried to exterminate our entire people are the orcs, and only because they were pest-number-two in the eyes of the rest of the world.

Panel 5
Jo’mak: But our god, Jahl, teaches us that all life is sacred, even the bastards tryin’ ta kick your head in. So we hide. Sure, we fight when we can, but we mostly hide.

Panel 6
Jo’mak: But Grish always thought that we ought to stop hiding. That we should fight back. Which is all fine and good, but…

Panel 7
Jo’mak: After our daughter disappeared she blamed the Romans. She started reading a lot of militant literature. There’s a group of revolutionaries who interpret some of Jahl’s legends as a call to arms. She joined them.

I told her to stop, and she flipped. Annexed the whole northern kingdom and shut down communication and trade with us.

Panel 8
Jo’mak: But even they knew that a full-scale war against the Romans wouldn’t be possible. At the most, they called for small-scale raids, kidnappings, ambushing weakened groups of soldiers or individuals along the roads. Or collapsing some of the colony mines.

Panel 9
Jo’mak: But she wanted war. And she wanted it to be declared by Romani herself. So she could justify the whole-sale slaughter that would ensue. She’s been arresting or kidnapping Romans and demanding ransome.

Panel 10
But I didn’t think that with a couple o’ space men and a fucking NILDAR yous would be bothered.

I sent word ahead and she said she’d treat yous like guests. I didn’t know this would happen.