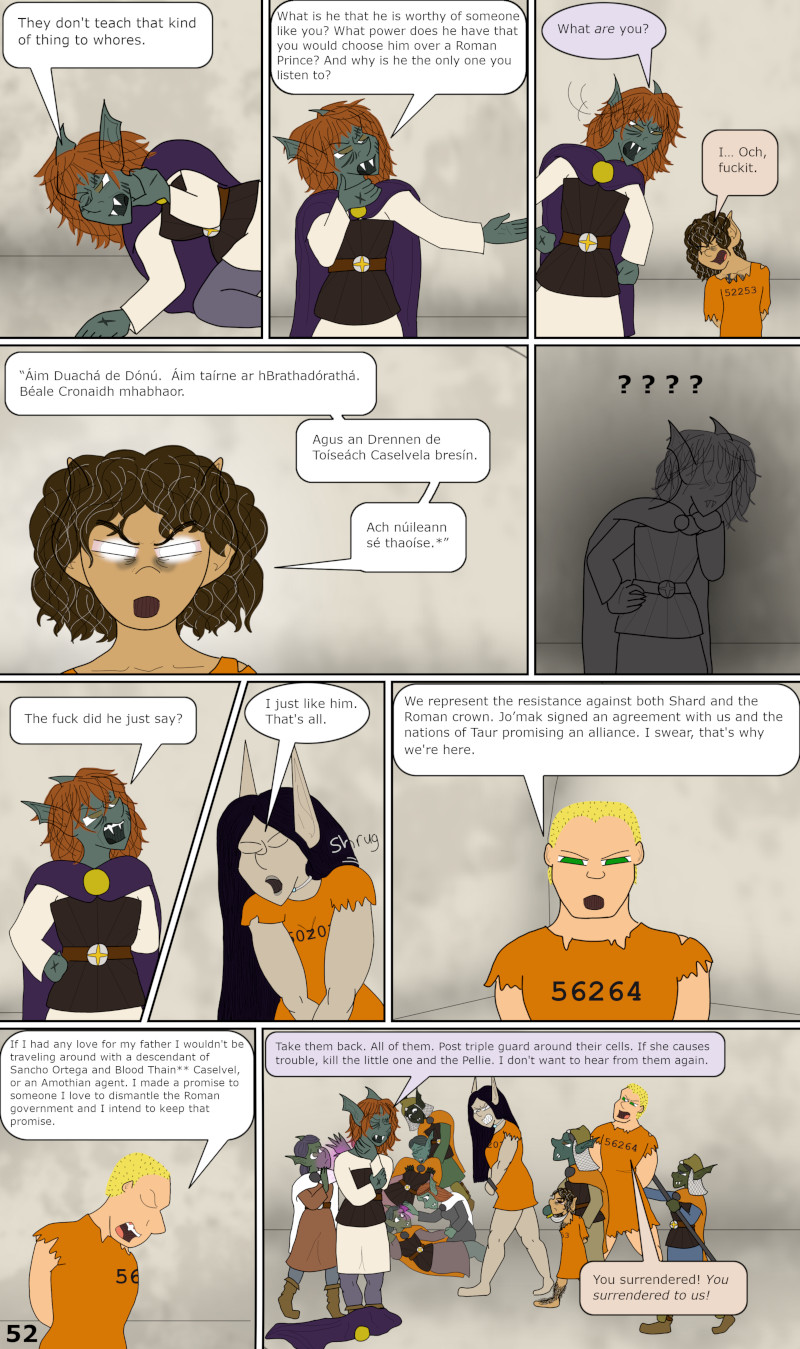 It’s the first verse of an ancient prayer Edenean halflings are taught, one of the few shreds of their old culture they have to cling to. In Edenean culture, words have power. All words are magic, and in a place where your very humanity has been outlawed, speaking your own language becomes a powerful act of defiance. A simple prayer remembering your ancestors becomes a sacred mantra, calling on the strength of those long dead. And those words, though small and drowned in the sea of oppression, nevertheless make ripples that are felt far and wide. The very act of reciting this prayer has, for Edeneans, become a talisman that gives them strength. Those words could one day topple empires. Ortega understood this. So did the Roman crown.

** “Kings by Blood and by Axe.” Kings/queens who won their posts by killing demons, monsters, giants, or other blood thains.

Page 52 panel 1
(Gri’shak gets up)
Gri’shak: They don’t teach that kind of thing to whores.

Panel 2
Gri’shak: What is he that he is worthy of someone like you? What power does he have that you would choose him over a Roman Prince? And why is he the only one you listen to?

Panel 5
(Gri’shak looks at him incomprehensibly)

Panel 6
Gri’shak: The fuck did he just say?

Panel 7
Lysander: We represent the resistance against both Shard and the Roman crown. Jo’mak signed an agreement with us and the nations of Taur promising an alliance. I swear, that’s why we’re here.

Panel 8
Lysander: If I had any love for my father I wouldn’t be traveling around with a descendant of Sancho Ortega and Blood Thain** Caselvel, or an Amothian agent. I made a promise to someone I love to dismantle the Roman government and I intend to keep that promise.

Panel 9
Gri’shak: (to a bevvy of fresh guards who come in, some dragging off their injured comrades, one of them healing Grish’ak’s back.) Take them back. All of them. Post triple guard around their cells. If she causes trouble, kill the little one and the Pellie. I don’t want to hear from them again.