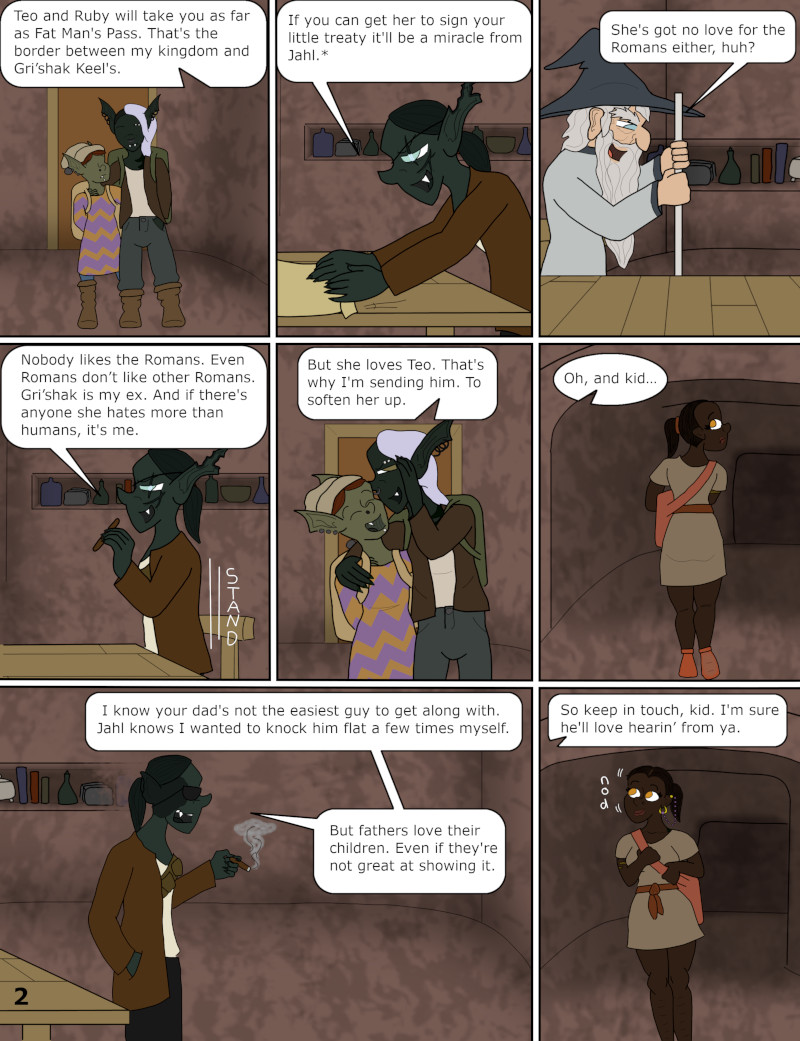 * In the shortest possible terms, Jahl is the God of Goblins. He is also the god most called upon by people who feel there is no god left that will have them. According to Goblin lore, Jahl once belonged to the Pantheon (literally every god on the planet, regardless of who their worshipers are.) We’re not quite sure what happened, there are a lot of different interpretations, but somehow he was cast out of the Pantheon and came to earth. He was lonely, so he sang a song, and cried as he sang. Where his tears fell, people appeared. These were goblins.

As such, they tend to favor those who are cast out or who are otherwise hated. They’ll almost always help those in need, even if they have very little to give. They are the only non-human monotheistic people on the planet. Big hearts, bad attitudes.

Page 2 panel 1
Jo: (motioning to his son and future son-in-law) Teo and Ruby will take you as far as Fat Man’s Pass. That’s the border between my kingdom and Gri’shak Keel’s.

Panel 2
Jo: If you can get her to sign your little treaty it’ll be a miracle from Jahl.*

Panel 3
Alexey: She’s got no love for the Romans either, huh?

Panel 4
Jo: Nobody likes the Romans. Even Romans don’t like other Romans. Gri’shak is my ex. And if there’s anyone she hates more than humans, it’s me.

Panel 5
Jo: But she loves Teo. That’s why I’m sending him. To soften her up.

Panel 7
Jo: I know your dad’s not the easiest guy to get along with. Jahl knows I wanted to knock him flat a few times myself. But fathers love their children. Even if they’re not great at showing it.