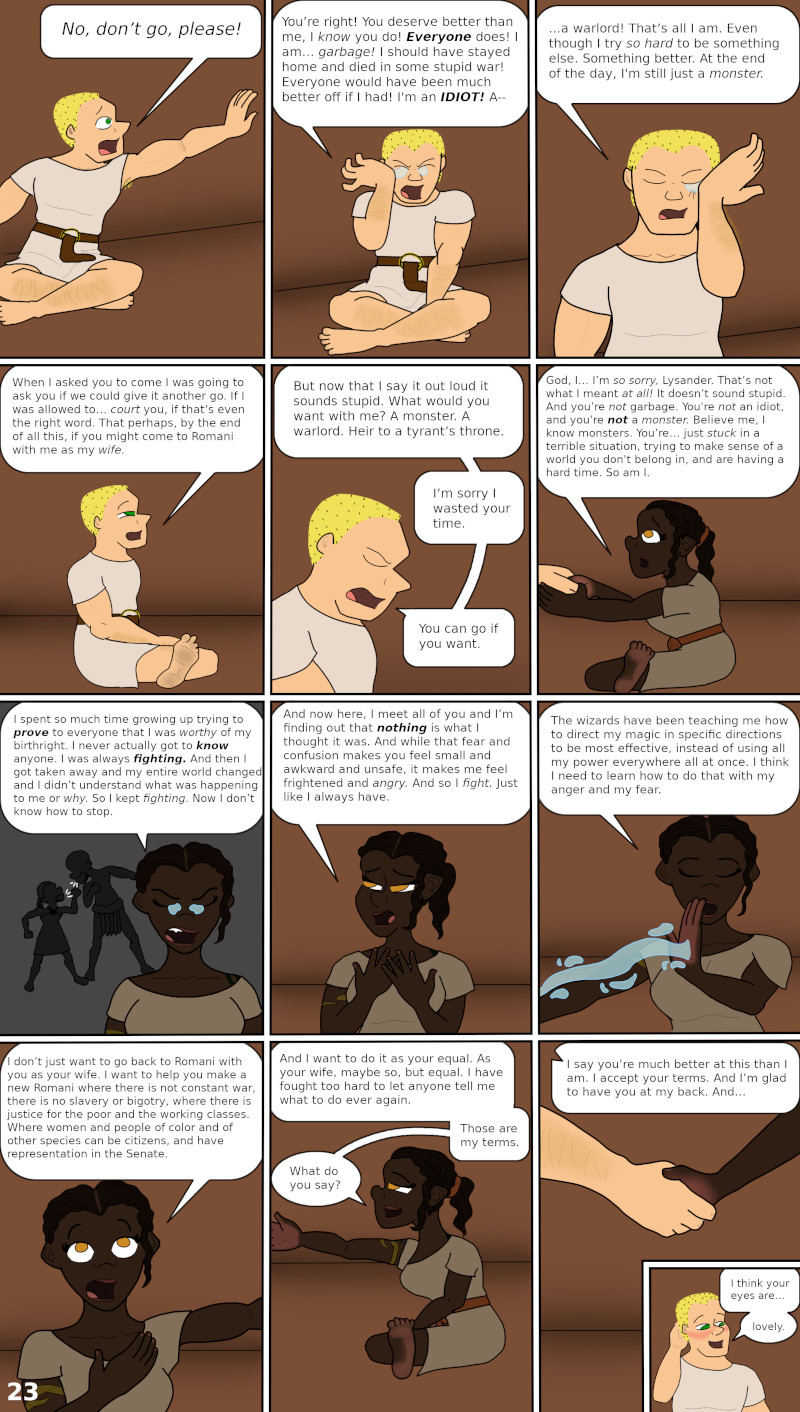 Now he has a girlfriend AND someone to help him lead the revolution. Now he just needs to not screw this up…

Also, you may have noticed the comic now has a ko-fi account, an instagram, and a discord! Other changes will coming in the future as well.

Page 23 panel 1
(Uba gets up to leave. Lysander reaches out to her)
Lysander: No, don’t go, please!

Panel 2
Lysander: (teary eyed) You’re right! You deserve better than me, I know you do! Everyone does! I am… garbage! I should have stayed home and died in some stupid war! Everyone would have been much better off if I had! I’m an IDIOT! A–

Panel 3
Lysander: …a warlord! That’s all I am. Even though I try so hard to be something else. Something better. At the end of the day, I’m still just a monster.

Panel 4
Lysander: When I asked you to come I was going to ask you if we could give it another go. If I was allowed to… court you, if that’s even the right word. That perhaps, by the end of all this, if you might come to Romani with me as my wife.

Panel 5
Lysander: But now that I say it out loud it sounds stupid. What would you want with me? A monster. A warlord. Heir to a tyrant’s throne.

I’m sorry I wasted your time. You can go if you want.

Panel 6
Uba: God, I… I’m so sorry, Lysander. That’s not what I meant at all! It doesn’t sound stupid. And you’re not garbage. You’re not an idiot, and you’re not a monster. Believe me, I know monsters. You’re… just stuck in a terrible situation, trying to make sense of a world you don’t belong in, and are having a hard time. So am I.

Panel 7
Uba: I spent so much time growing up trying to prove to everyone that I was worthy of my birthright. I never actually got to know anyone. I was always fighting. And then I got taken away and my entire world changed and I didn’t understand what was happening to me or why. So I kept fighting. Now I don’t know how to stop.

Panel 8
Uba: And now here, I meet all of you and I’m finding out that nothing is what I thought it was. And while that fear and confusion makes you feel small and awkward and unsafe, it makes me feel frightened and angry. And so I fight. Just like I always have.

Panel 9
Uba: The wizards have been teaching me how to direct my magic in specific directions to be most effective, instead of using all my power everywhere all at once. I think I need to learn how to do that with my anger and my fear.

Panel 10
Uba: I don’t just want to go back to Romani with you as your wife. I want to help you make a new Romani where there is not constant war, there is no slavery or bigotry, where there is justice for the poor and the working classes. Where women and people of color and of other species can be citizens, and have representation in the Senate.

Panel 11
Uba: And I want to do it as your equal. As your wife, maybe so, but equal. I have fought too hard to let anyone tell me what to do ever again.

What do you say?

Panel 12
Lysander: I say you’re much better at this than I am. I accept your terms. And I’m glad to have you at my back. And…

I think your eyes are…