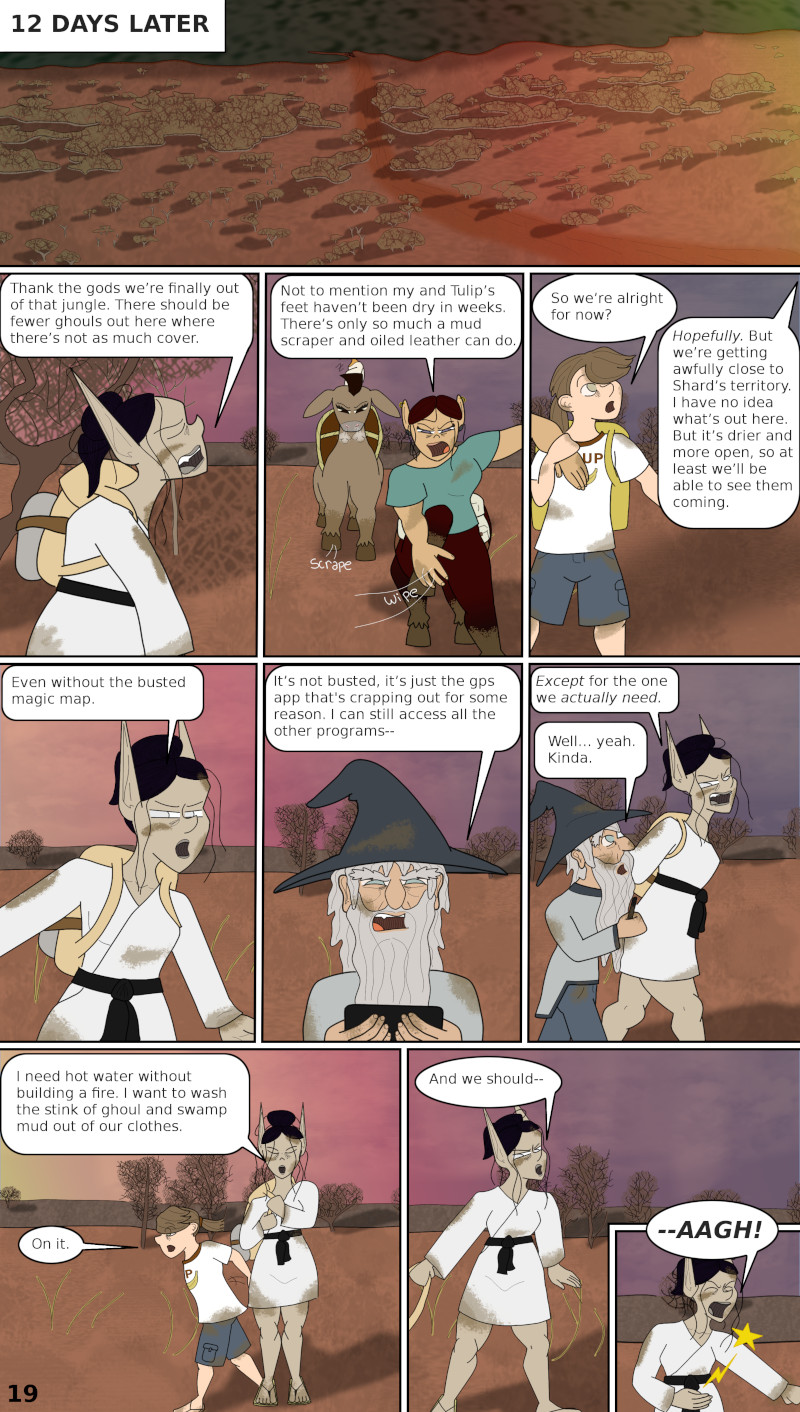 By far the hardest aspect of dating a centaur for Bradley has been hoof maintenance. Hoofed mammals are a very rare thing in Pelleponese, so it doesn’t occur to him that hooves are a thing and that they need proper maintenance. Back on the plains, centaurs are communal groomers, and Niki and her mother generally cared for each other’s hooves, and she just can’t seem to reach her own, so doing it herself isn’t really an option.

Lysander never really had much to do with horses himself. He doesn’t really like them, and they don’t really like him. He’ll ride if he has to, but that’s about it. And Beatrix always had people to care for her mounts for her. Besides, after she learned how to turn into a bird, she prefers to fly to cover long distances. It’s much faster anyway.

So it falls to Sancho to teach Bradley how to do it. He’s been taking care of Tulip for almost twenty years and has lots of practise. Even when he was too high to feed himself, he still took care of Tulip. She thinks he’s her mother and he just kinda… accepted it. And since he can talk to her and understand her, he knows if he’s being to rough with the scraper or if she’s in an uncomfortable position. He also doesn’t believe in shodding equine and asinine. Quel suprise, hammering an iron nail into an animal’s foot hurts. So if they’re going over pavement or rock, he made little wood-and-hardened-leather booties for her to wear.

Panel 2
Bea: Thank the gods we’re finally out of that jungle. There should be fewer ghouls out here where there’s not as much cover.

Panel 3
Niki: (trying to wipe mud off her very muddy feet. Tulip trying to scrape her’s off) Not to mention my and Tulip’s feet haven’t been dry in weeks. There’s only so much a mud scraper and oiled leather can do.

Bea: (off camera) Hopefully. But we’re getting awfully close to Shard’s territory. I have no idea what’s out here. But it’s drier and more open, so at least we’ll be able to see them coming.

Panel 5
Bea: Even without the busted magic map.

Panel 6
Alexey: It’s not busted, it’s just the gps app that’s crapping out for some reason. I can still access all the other programs–

Panel 7
Bea: Except for the one we actually need.

Panel 8
Bea: (unslinging pack) I need hot water without building a fire. I want to wash the stink of ghoul and swamp mud out of our clothes.