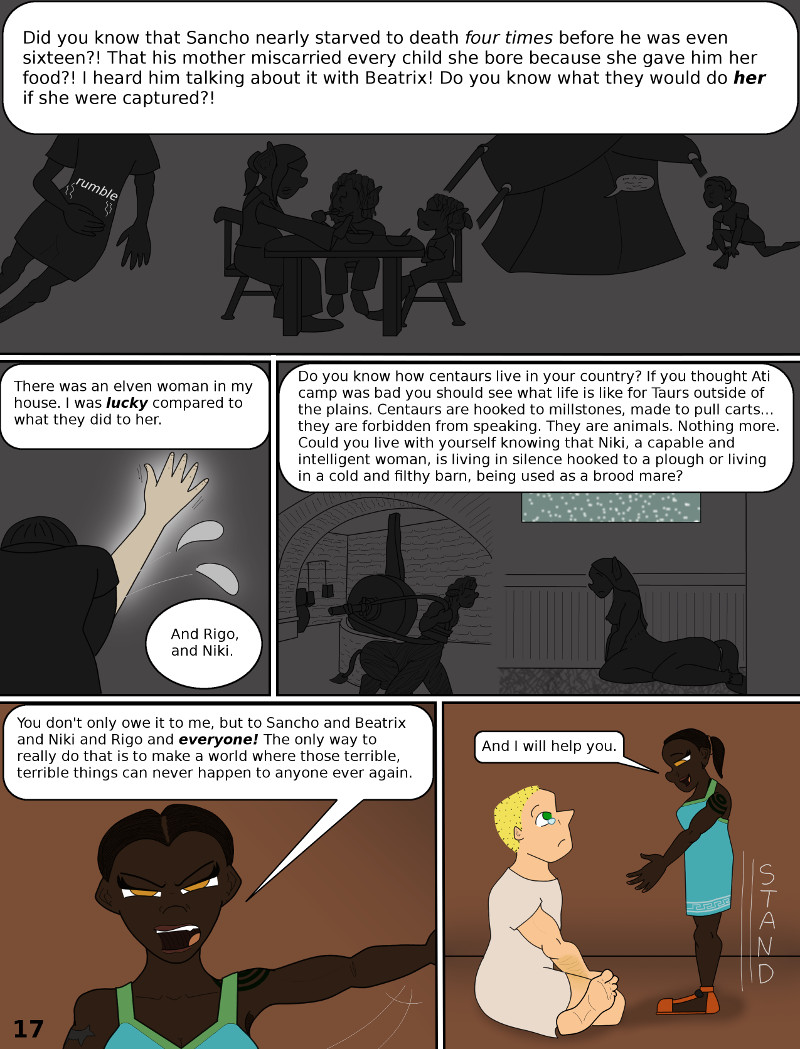 Even today, Sancho doesn’t eat more than just enough to keep him on his feet. He’s watched too many babies die from hunger before they were even born just so his parents could keep him alive. He’d always known the kind of person he’d turn out to be, and thought he wasn’t worth saving. But Olivia and Fergus knew that with the way things were going in Edena, with famines and war and illness and bad weather, he would probably be their only child, no matter how many times they tried. And they’d rather have one living child than none at all.

And they were right. He was the only one to survive. And he knows he’s done nothing but fuck everything up. He left home, Holgus Fynch seized the farm and sold it off to a Yazhuluista thug, his parents died of plague, and he drank away what little money they left him. And he wishes like hell that his mother hadn’t starved herself to feed him and had had a different child, a better child, to take his place.

So now he has an eating disorder on top of all the other disorders the gods saw fit to throw at him.

But now he has a woman he loves, and who loves him, and a baby on the way. He thinks he’s been given a second chance to do things right. He’s going to try his best to not screw this up the way he has everything else.

But he still won’t eat.

Page 17 panel 1
Uba: Did you know that Sancho nearly starved to death four times before he was even sixteen?! That his mother miscarried every child she bore because she gave him her food?! I heard him talking about it with Beatrix! Do you know what they would do her if she were captured?!

Panel 2
Uba: There was an elven woman in my house. I was lucky compared to what they did to her.

And Rigo, and Niki.

Panel 3
Uba: Do you know how centaurs live in your country? If you thought Ati camp was bad you should see what life is like for Taurs outside of the plains. Centaurs are hooked to millstones, made to pull carts… they are forbidden from speaking. They are animals. Nothing more. Could you live with yourself knowing that Niki, a capable and intelligent woman, is living in silence hooked to a plough or living in a cold and filthy barn, being used as a brood mare?

Panel 4
Uba: You don’t only owe it to me, but to Sancho and Beatrix and Niki and Rigo and everyone! The only way to really do that is to make a world where those terrible, terrible things can never happen to anyone ever again.