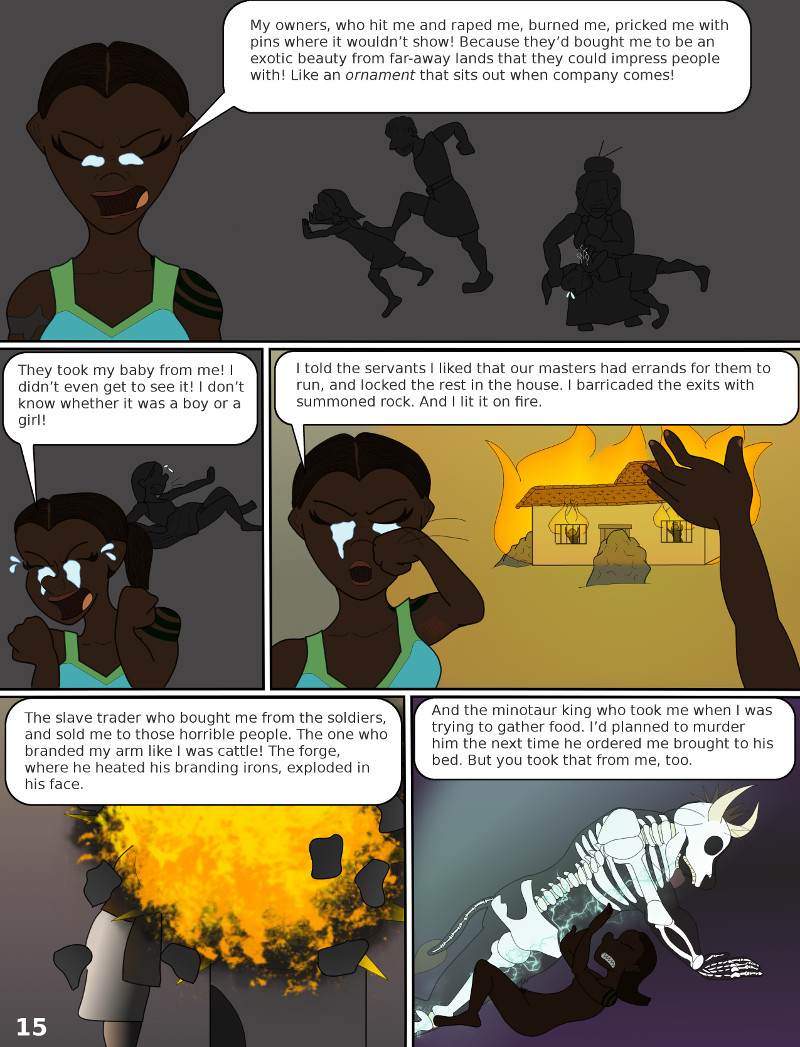 It’s a miracle she hasn’t murdered anyone on this quest yet. At least, not on purpose.

Page 15 panel 1
(foreground: Uba, tears welling up. Background: silhouettes of man kicking Uba to ground, and woman tugging Uba by hair and burning her scalp with, presumably, a hot flat iron.)
Uba: My owners, who hit me and raped me, burned me, pricked me with pins where it wouldn’t show! Because they’d bought me to be an exotic beauty from far-away lands that they could impress people with! Like an ornament that sits out when company comes!

Panel 2
(Foreground: Uba crying. Background: silhouette of Uba, belly still distended from giving birth, screaming and reaching for something off screen.)
Uba: They took my baby from me! I didn’t even get to see it! I don’t know whether it was a boy or a girl!

Panel 3
(Foreground: Uba wiping away tears. Background: Her hand raised, a house on fire.)
Uba: I told the servants I liked that our masters had errands for them to run, and locked the rest in the house. I barricaded the exits with summoned rock. And I lit it on fire.

Panel 4
(a man leaning over a furnace, which explodes.)
Uba: (off camera) The slave trader who bought me from the soldiers, and sold me to those horrible people. The one who branded my arm like I was cattle! The forge, where he heated his branding irons, exploded in his face.

Panel 5
( Uba lying underneath Tavros, electrocuting him.)
Uba: (off camera) And the minotaur king who took me when I was trying to gather food. I’d planned to murder him the next time he ordered me brought to his bed. But you took that from me, too.