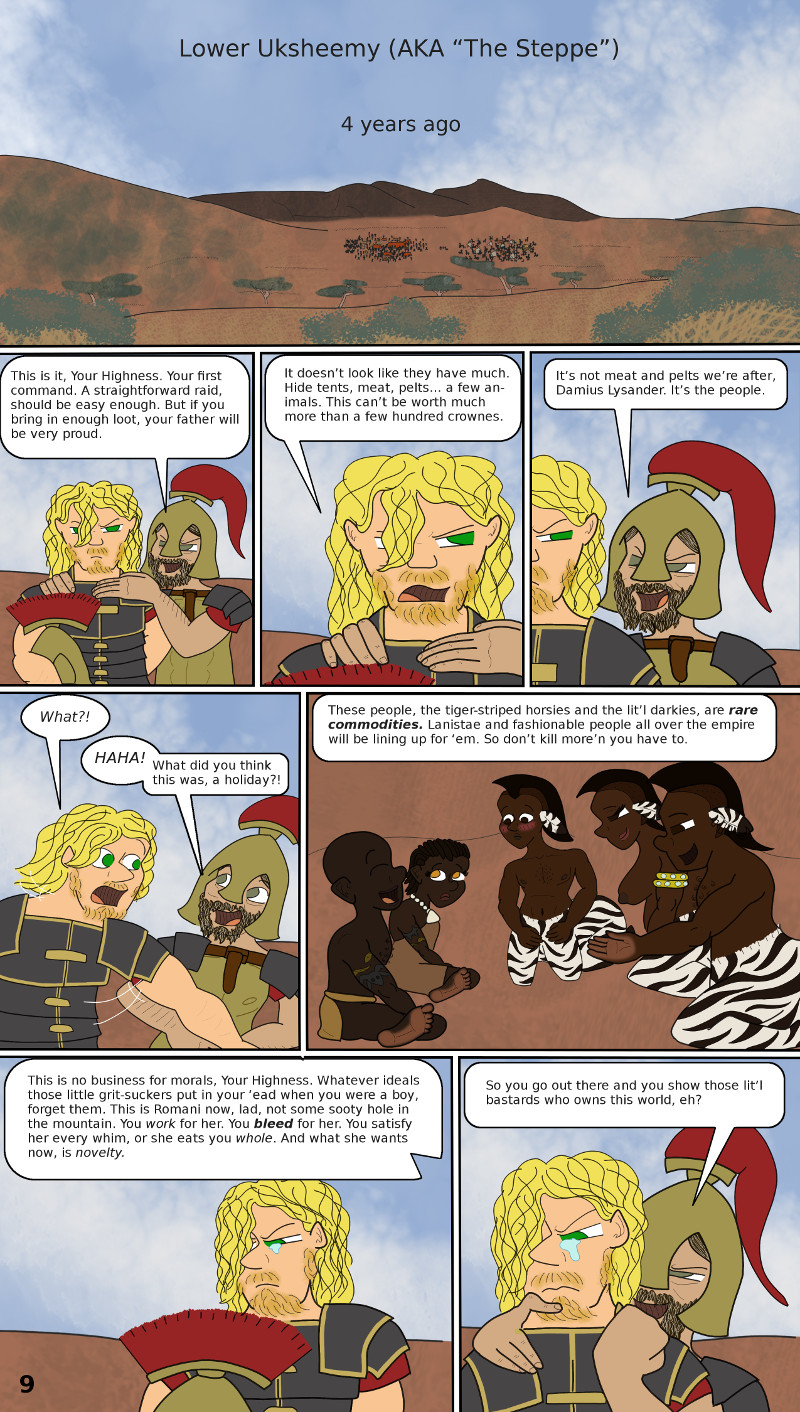 Even with only 1/4 Dwarfen blood he’s still capable, even at 15, of sprouting a beard many adult men would be envious of.

Lysander had lived practically his whole life, at least the bits he can remember, as a Nzima Dwarf (though be it a very big one.) Until two years before this, he had never spoken Common or seen the sun. His mother sent him to live in the court of the Low King Brr’gt’e when he was three years old, because she feared what his father’s court would do to him. Especially if they found out her real father was Hrr’gt, the Low King’s sibling. The deal was he would learn the secrets of their mechanical technology, their metallurgy, and their alchemy and bring them home.

Instead, he lived as every other dwarfish child, and he was happy. He had friends. He collected bugs and lizards. He had a hobby he was very good at, and was prepared to make his career upon reaching adulthood. He’d even been promised a spouse of very good standing. But at 13, Duke Aemelius Beniaminus III decided it was time to bring his youngest son home. So he spent two miserable, bright, hot years learning battle tactics, warfare, and Common, attempting to rid him of any semblance of Nzimian accent and behaviour. As the second-born legitimate son, his future had been planned thusly: He would be head of the military, a warlord to bring riches and glory and more land to his older brother’s mighty empire. And he hated it. He hated every last damn minute of it. The drills, the food, the light, the killing, the smell of hot blood under the sun… of the stench of stale wine and rotting teeth of big men whose job it was to “turn boys into men,” which translated into sexual assault for some godforsaken reason. Luckily for Lysander, he was already as large as most adult men, even at 13, and many times stronger. He was able to fight off most advances. Most advances.

Text: Lower Uksheemy (AKA “The Steppe”)

Panel 2
(older Roman man in Legate’s uniform with his hand on shoulder of a younger, but not shorter, Roman boy with long, wavy golden hair in a centurion’s uniform)
Legate: This is it, Your Highness. Your first command. A straightforward raid, should be easy enough. But if you bring in enough loot, your father will be very proud.

Panel 3
Boy: It doesn’t look like they have much. Hide tents, meat, pelts… a few animals. This can’t be worth much more than a few hundred crownes.

Panel 5
Lysander: (turns) What?!
Legate: (laughs) What did you think this was, a holiday?!

Panel 6
Legate: These people, the tiger-striped horsies and the lit’l darkies, are rare commodities. Lanistae and fashionable people all over the empire will be lining up for ‘em. So don’t kill more’n you have to.

Panel 7
(Lysander looks angry and tearful)
Legate: (off camera) This is no business for morals, Your Highness. Whatever ideals those little grit-suckers put in your ‘ead when you were a boy, forget them. This is Romani now, lad, not some sooty hole in the mountain. You work for her. You bleed for her. You satisfy her every whim, or she eats you whole. And what she wants now, is novelty.

Panel 8
Legate: (close to Lysander’s ear, stroking his face creepily) So you go out there and you show those lit’l bastards who owns this world, eh?