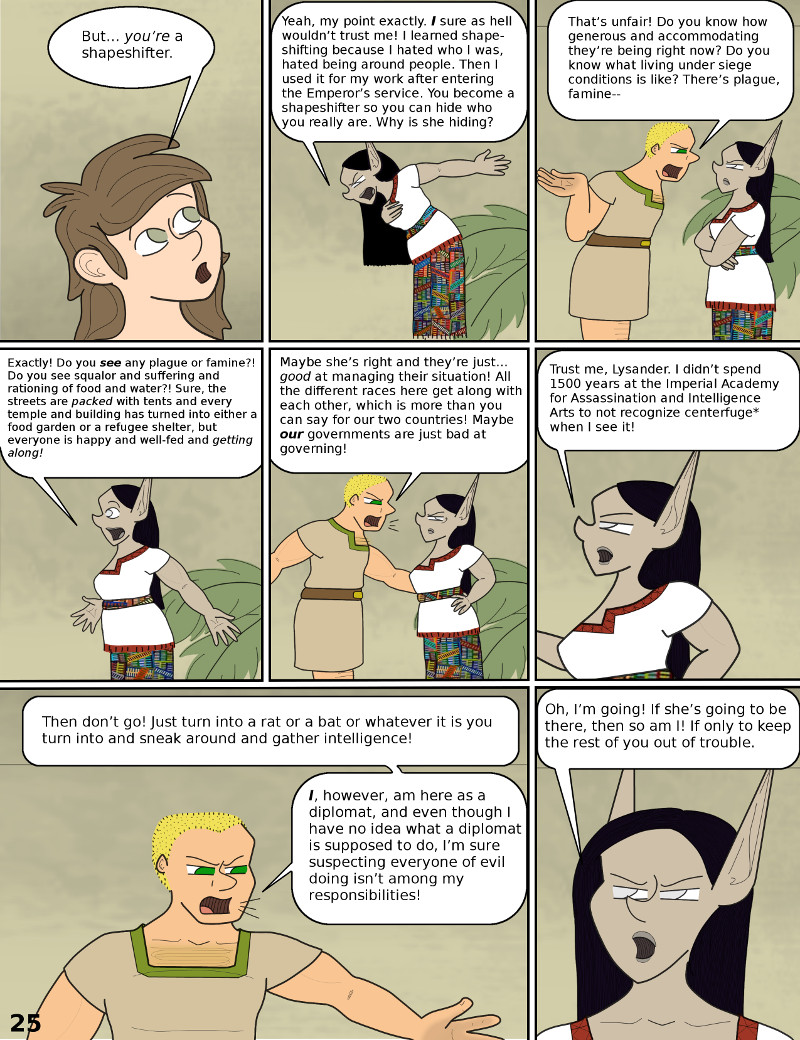 *She means subterfuge. She doesn’t even know if that’s the word she wants to use. Common is weird**

** Although she has become pretty damn fluent in Common in her centuries of spying on the Mainland, she really only knows the words she’s had to use or understand for work. For example, she can talk about troop movements, suspicious behaviors, basic needs, colors, sounds, landmarks, etc. But there are times when one word she rarely has to use sounds an awful lot like another word she’s rarely had to use, she will confuse the two. Also, she can read intercepted intelligence reports in Common, Romae, and four different kinds of code, but she cannot read, say, a play, or a philosophical pamphlet, or a love letter, or something that uses lots of words or expressions or metaphors or analogies that are not in everyday use.

She also isn’t clear on words she doesn’t use in Nildarin, or that don’t have a direct translation. Like the various uses of the word “love”, or uterus-related functions and medical problems, or talking about feelings. A woman of her rank and status doesn’t discuss these things. Ever. Therefore she has trouble discussing them concisely, or in words that actually exist in the Common lexicon.)

Panel 2
Bea: Yeah, my point exactly. I sure as hell wouldn’t trust me! I learned shape-shifting because I hated who I was, hated being around people. Then I used it for my work after entering the Emperor’s service. You become a shapeshifter so you can hide who you really are. Why is she hiding?

Panel 3
Lysander: That’s unfair! Do you know how generous and accommodating they’re being right now? Do you know what living under siege conditions is like? There’s plague, famine–

Panel 4
Bea: Exactly! Do you see any plague or famine?! Do you see squalor and suffering and rationing of food and water?! Sure, the streets are packed with tents and every temple and building has turned into either a food garden or a refugee shelter, but everyone is happy and well-fed and getting along!

Panel 5
Lysander: Maybe she’s right and they’re just… good at managing their situation! All the different races here get along with each other, which is more than you can say for our two countries! Maybe our governments are just bad at governing!

Panel 6
Bea: Trust me, Lysander. I didn’t spend 1500 years at the Imperial Academy for Assassination and Intelligence Arts to not recognize centerfuge* when I see it!

Panel 7
Lysander: Then don’t go! Just turn into a rat or a bat or whatever it is you turn into and sneak around and gather intelligence! I, however, am here as a diplomat, and even though I have no idea what a diplomat is supposed to do, I’m sure suspecting everyone of evil doing isn’t among my responsibilities!

Panel 8
Bea: Oh, I’m going! If she’s going to be there, then so am I! If only to keep the rest of you out of trouble.