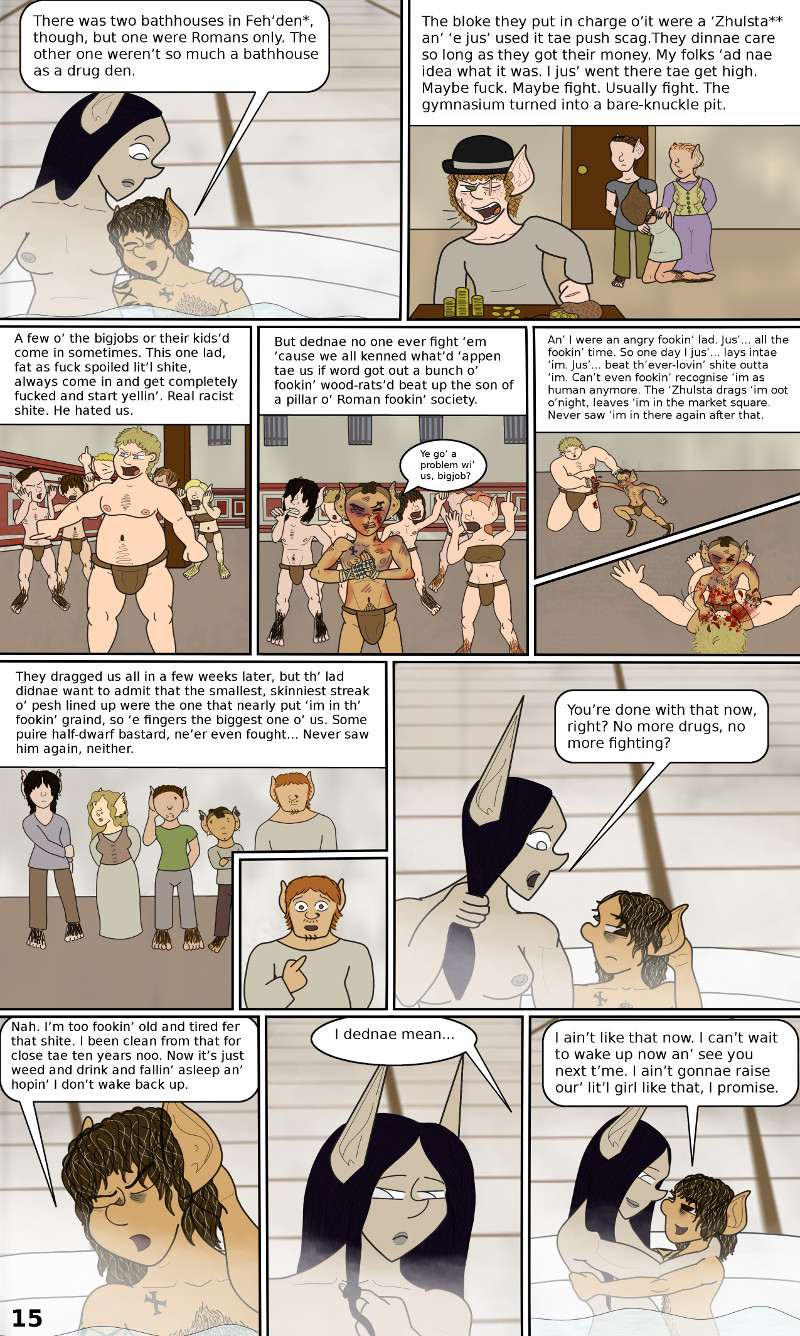 *Shortened from “Faire Edenn (uh- DEN)”, Edena’s one and only city. The governor and all his appointed officials (all Roman men) and their families live there. Getting posted to Edena means you’ve pissed someone off in the Roman court.

** Yazhuluista. Groran for “ghost”. One of the biggest gangs in Grora, with affiliates in Edena, Tamlin, and southern Romani. Not to be fucked with.

Page 15 panel 1
Sancho: There was two bathhouses in Feh’den*, though, but one were Romans only. The other one weren’t so much a bathhouse as a drug den.

Panel 2
Sancho: The bloke they put in charge o’it were a ‘Zhulsta** an’ ‘e jus’ used it tae push scag.They dinnae care so long as they got their money. My folks ‘ad nae idea what it was. I jus’ went there tae get high. Maybe fuck. Maybe fight. Usually fight. The gymnasium turned into a bare-knuckle pit.

Panel 3
Sancho: A few o’ the bigjobs or their kids’d come in sometimes. This one lad, fat as fuck spoiled lit’l shite, always come in and get completely fucked and start yellin’. Real racist shite. He hated us.

Panel 4
But dednae no one ever fight ‘em ‘cause we all kenned what’d ‘appen tae us if word got out a bunch o’ fookin’ wood-rats’d beat up the son of a pillar o’ Roman fookin’ society.

Panel 5
Sancho: An’ I were an angry fookin’ lad. Jus’… all the fookin’ time. So one day I jus’… lays intae ‘im. Jus’… beat th’ever-lovin’ shite outta ‘im. Can’t even fookin’ recognise ‘im as human anymore. The ‘Zhulsta drags ‘im oot o’night, leaves ‘im in the market square. Never saw ‘im in there again after that.

Panel 6
Sancho: They dragged us all in a few weeks later, but th’ lad didnae want to admit that the smallest, skinniest streak o’ pesh lined up were the one that nearly put ‘im in th’ fookin’ graind, so ‘e fingers the biggest one o’ us. Some puire half-dwarf bastard, ne’er even fought… Never saw him again, neither.

Panel 8
Sancho: Nah. I’m too fookin’ old and tired fer that shite. I been clean from that for close tae ten years noo. Now it’s just weed and drink and fallin’ asleep an’ hopin’ I don’t wake back up.

Panel 10
(Sancho pulls her close)
Sancho: I ain’t like that now. I can’t wait to wake up now an’ see you next t’me. I ain’t gonnae raise our’ lit’l girl like that, I promise.