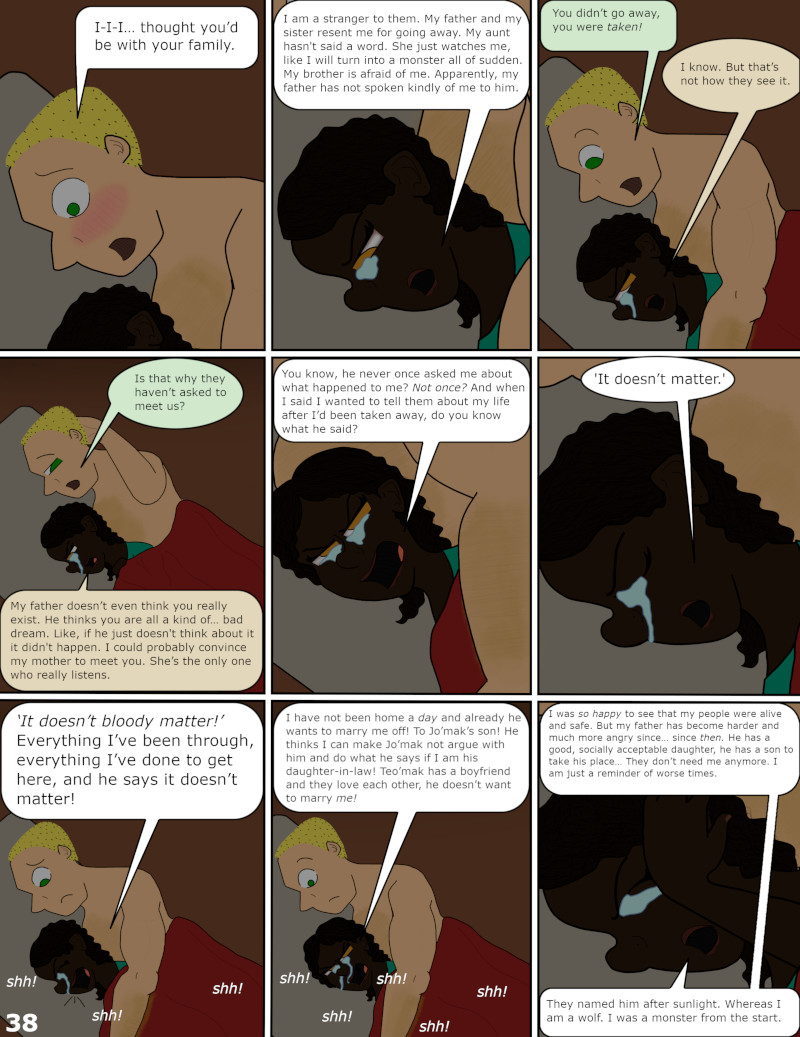 Hey hey hey! Wolves are not monsters. They are Feral Good Bois.

Panel 2
Uba: (tear welling up.) I am a stranger to them. My father and my sister resent me for going away. My aunt hasn’t said a word. She just watches me, like I will turn into a monster all of sudden. My brother is afraid of me. Apparently, my father has not spoken kindly of me to him.

Panel 3
Lysander: You didn’t go away, you were taken!
Uba: I know. But that’s not how they see it.

Panel 4
Lysander: Is that why they haven’t asked to meet us?
Uba: My father doesn’t even think you really exist. He thinks you are all a kind of… bad dream. Like, if he just doesn’t think about it it didn’t happen. I could probably convince my mother to meet you. She’s the only one who really listens.

Panel 5
Uba: You know, he never once asked me about what happened to me? Not once? And when I said I wanted to tell them about my life after I’d been taken away, do you know what he said?

Panel 7
Uba: ‘It doesn’t bloody matter!’ Everything I’ve been through, everything I’ve done to get here, and he says it doesn’t matter!
(someone off camera shushes her)

Panel 8
Uba: I have not been home a day and already he wants to marry me off! To Jo’mak’s son! He thinks I can make Jo’mak not argue with him and do what he says if I am his daughter-in-law! Teo’mak has a boyfriend and they love each other, he doesn’t want to marry me!
(more shushing)

Panel 9
Uba: I was so happy to see that my people were alive and safe. But my father has become harder and much more angry since… since then. He has a good, socially acceptable daughter, he has a son to take his place… They don’t need me anymore. I am just a reminder of worse times.

They named him after sunlight. Whereas I am a wolf. I was a monster from the start.