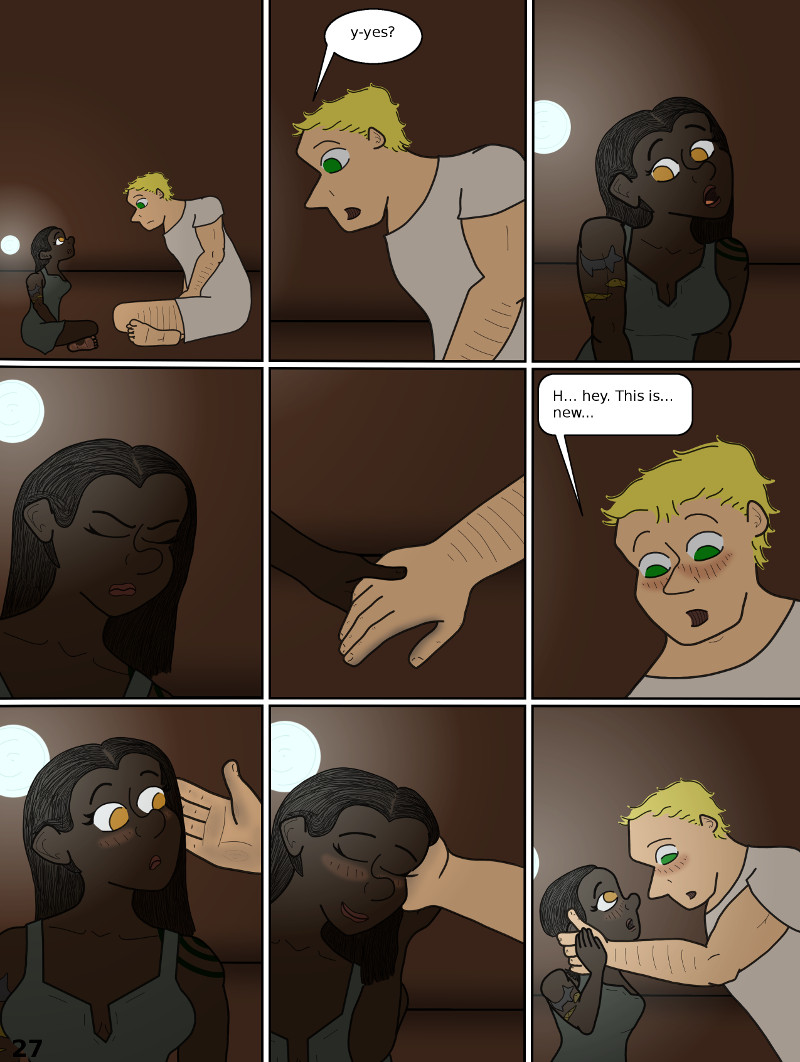 Unbeknownst even to herself, Uba is demisexual/demiromantic. That is, she doesn’t feel an intimate or romantic bond until a strong emotional bond is formed first. She still assumed that someday she would get married and have children because that’s what people did, but love wouldn’t necessarily have anything to do with it. She was never averse to the idea of marrying Rigo’s son and she had every intention of being a good wife, and she certainly liked him, but she didn’t love him.

Even before she was rounded up and taken to Romani she’d never really formed that kind of emotional relationship with someone. It wasn’t as if no one liked her or she didn’t like anyone. In such a small community everybody knew everybody, and everybody did their utmost to empathize with everyone else, to help one another, and to get along. (Besides, even if she probably wasn’t going to be the Shaman, she certainly had shamanic powers and it’s in everyone’s best interest to stay friendly with someone who can talk to the damn gods.) But she’d been so focused on her goal of convincing everyone that she WAS the fucking shaman and had every gods damned right to be that she never really stopped to make friends. And then she’d met Lysander.

He was a big scary Roman and his voice was better suited for shouting and speaking dwarfish (a language some have equated with trying to cough with a throat full of gravel) than singing or reciting poetry or anything usually considered romantic. And his body is better suited to marching with heavy loads and swinging sharp heavy metal… but the rest of him; his eyes, his manner, his soul, were better suited to sitting quietly at home after a long day of meaningful work listening to family and friends talk about their day; what they had for lunch, what they’d dreamt the night before, what they hoped tomorrow would bring. And he was nice to her. The first person to do so in years. The first time he’d seen her he saw her as a person. Not an object, or loot, like the others. Not someone to be slightly intimidated by, like back home with her clan. It had been a long time, at least in her mind, since she felt like she deserved compassion.

Everybody in this new community had somebody. The scary shiny girl had the small angry man, the wizards had each other, the young wizard had the pretty centaur… even the damn animals seemed to stick together. But Lysander didn’t have anybody. And neither did she. Oh, she told herself at first that she was just getting information, that she was just using him to get to the man that had taken her from her family so she could get revenge. But even when it became obvious that she was going to have to try a different tactic to get what she wanted, she kept coming back, and kept being quiet and letting him talk. Because it made her happy to have someone to listen to. It made her happy to see him happy. It felt nice to have someone. And even though everyone in he new community, even the scary shiny girl and the small angry man, was nice to her and treated her with respect and did things for her, for some reason she liked Lysander best.